Sometimes You Get Lucky

A lovely sunny morning so I went over to Wraik Hill and stopped to have a look around the 'Wraik Hill covered reservoir', next to Willow Woods. Picked up the usual jays, green woodpeckers etc and in the sky a buzzard, then another. I didn't have the camera with me so a quick 100yd yomp back to the car for the camera just in time as they came overhead. Encouraging, as I saw one on my last visit on the 23rd., perhaps they are going to be regular. Also saw another from the Wraik Hill reserve. 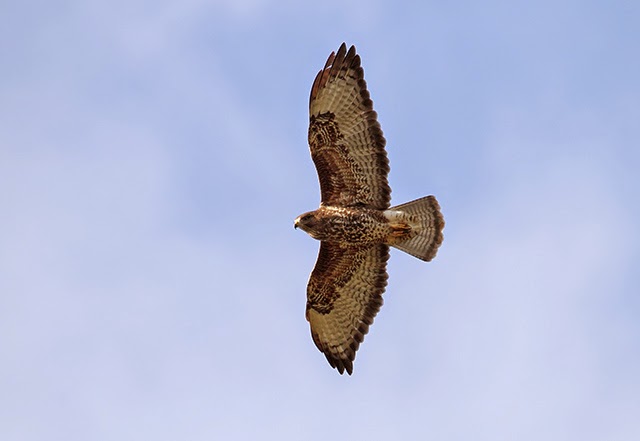 Nothing of real interest for the rest of the morning except 2 clouded yellows on the plots plus plenty of chaffinches and starlings on the move. 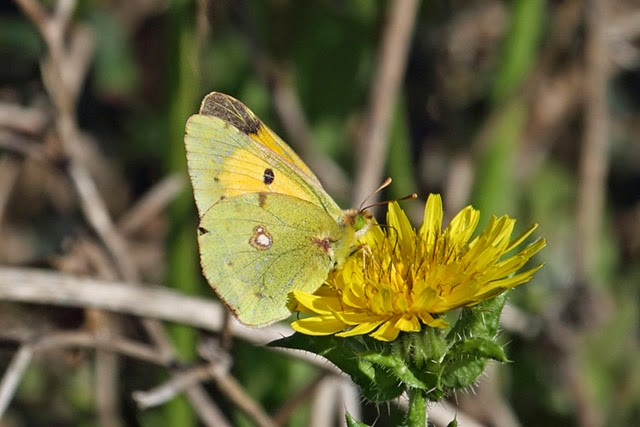 Tues 28th Oct.
News of a yellow-browed warbler found by Derek Smith at Shuart prompted me to have a look as I hadn't seen one this year.  I met Marc Heath who was already watching the bird, we managed a few shots in between the twigs and leaves but not ideal conditions. 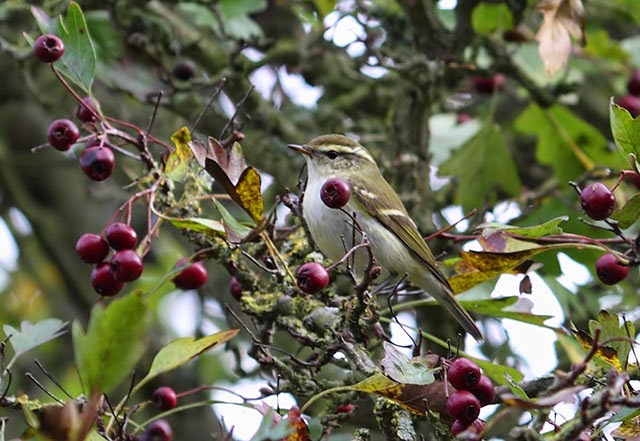 I was tempted to clone out the berry but not much of a shot anyway!

I left the site after about an hour and went back to Seasalter LNR to see if the wheatears were still present but no sign, brents were thinning out, still no knot or winter wader flocks, when's the winter coming. However, c.1500 goldies were out on the mussel bank (towards C.Coote) plus another 300 opposite the Sportsman when I returned to the car. As I walked back to the car a sparrowhawk was flying along the beach zooming past me 15 feet away disappearing around the bend of the wall. Stopping to look back it suddenly reappeared coming back towards me but flipped over the wall and down the grassy apron to the reedbed where it flew away east at high speed but not before I managed a few lucky shots. 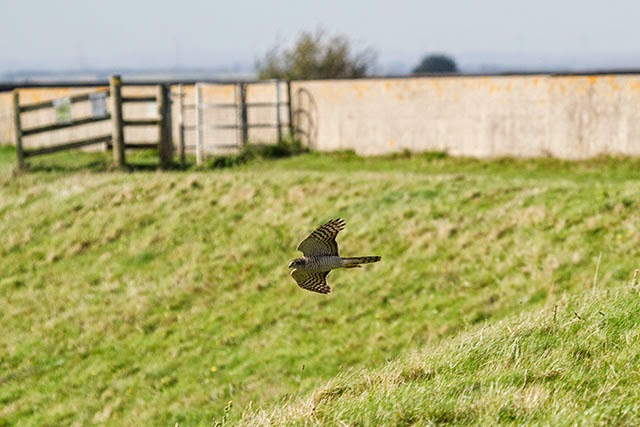 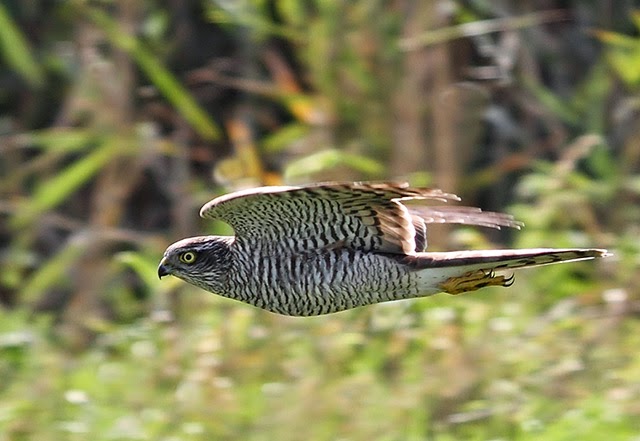 Not knowing where to go to find anything this morning I thought, save the diesel and go to Seasalter again. The first intention was to park by the pumping station and walk along the beach and then the plots but getting my gear out of the boot I noticed a kingfisher flying down the dyke towards me on the plots. A change of tactics, do the plots first then the beach.

{ For those who do not know what the 'plots' are, they are the Seasalter marshes, previously an old farm, which was bought up and sold into small 'camping and recreational' plots in the 60s.  Becoming a mess of rotting caravans and a blot on the landscape they were nearly all bought up over the years by the council, the remainder now under compulsory purchase orders. The RSPB have lately been overseeing the area but can't do much until they have complete control of the area.}

Walking along to the concrete bridge it seemed very quiet at first but after another few yards I saw a bird flying westwards about a quarter of a km away.  For some reason I readily recognised it to being a great grey shrike, the white wing flash and grey body, black tail and wings easily gave its ID away.  I prayed it would stop and land which it did in the top of a distant willow. I took a few shots which was hopeless considering the distance. I moved a little closer, still very distant and took a couple more to clinch the ID. Then after about twenty seconds it flew west towards the conifers where I lost it but managed a couple of distant flight shots.  The area has always looked good for shrikes but this one only stayed for a matter of seconds unlike Geoff's red-backed shrike by the YC which was watched for three days. However, two new shrikes to the site within a month was more than one could expect. I phoned Geoff who was close by but not close enough, seems I was the only one to see it! 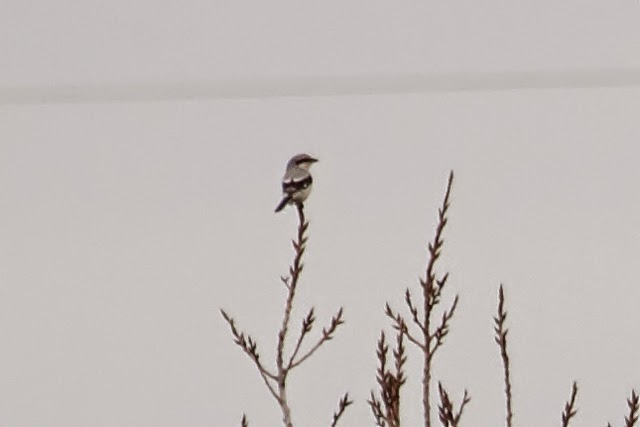 Other birds seen were 4 stonechats, a male marsh harrier, 2 gadwall, mallard, 2 cetti's, skylarks, a snipe, goldfinches, one jay, reed bunting, kestrel, curlew, coots, swans etc.. Small parties of chaffinches were going overhead all morning as were larger flocks of starlings.  We went back to the beach 'seat' for coffee and ticked off dunlin, turnstones, ringed plovers, g.c.grebes, redshank, brent etc. then a short walk along the LNR seeing what appeared to be a small raptor sitting at the back of the fields which had its back to us but probably a merlin or sparrowhawk maybe even a peregrine as at one point it turned it head showing some white around its chin area but very distant.
Posted by Mike Gould at 11:08 2 comments:

20th.   I met Steve Ashton at the high tide roost at Seasalter for some camera work and almost immediately a wheatear jumped up on a post by the tractor which posed quite nicely for us.  The brents were gathering around the 'island' plus all the waders were doing mass flybys along the beach giving us a chance for 'flock' photos but as usual not enough depth of field and too long lenses and not close enough. As we left a clouded yellow was floating over the grassy 'village green' but didn't pose for photos.
Moving up to the LNR at the Sportsman we headed for the seawall as the tide was now at the bottom of the beach and the brents were dabbling right along the edge. Many of the brents feeding on the edge were juveniles and usually accompanied by their parents, it looks as if they had another good breeding success this year. Fairly quiet otherwise, a few turnstones and a grey plover on the breakwaters plus two swallows going west. 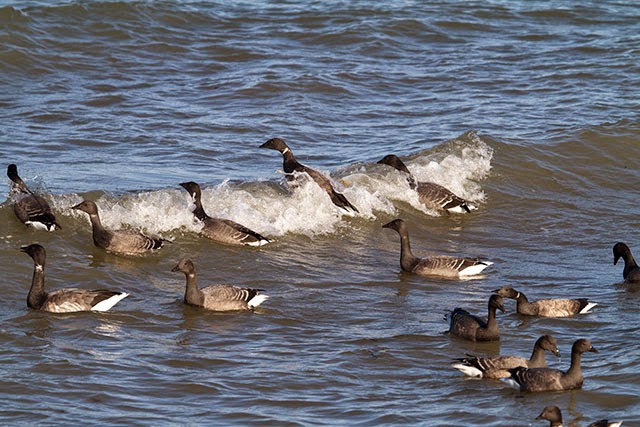 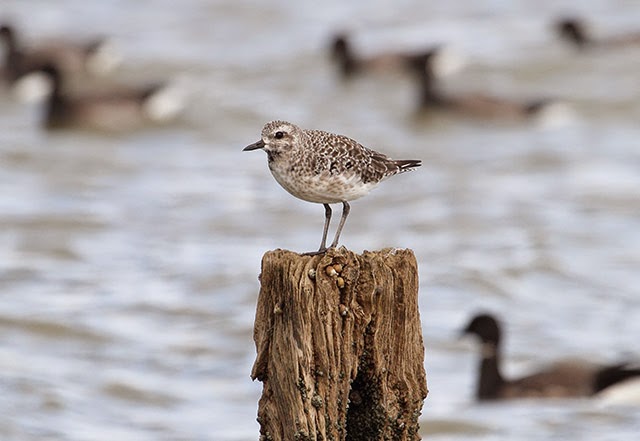 21st.  Went to Long Rock, a very windy morning, the tail end of hurricane 'Gonzalez', spent a bit of time photographing the brents surfing the waves before it became to windy to stand properly. 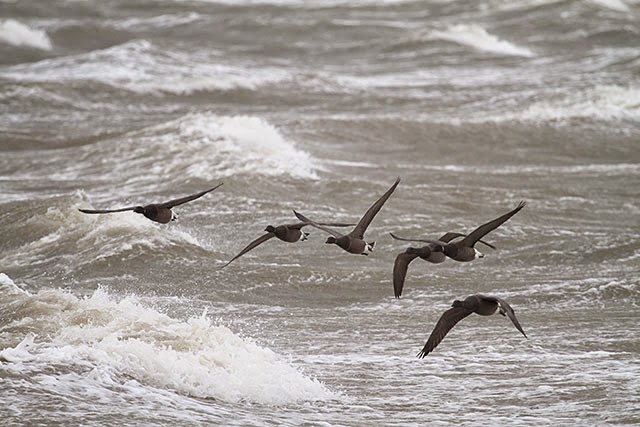 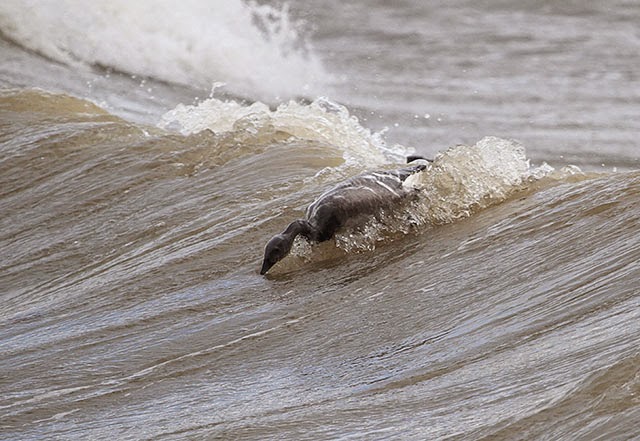 23rd.   Today, I did a visit to most of the local patch starting at Wraik Hill Reservoir finding song thrushes, 1 mistle thrush, jays, green woodpkers etc. and a buzzard coming over Willow Woods.  I moved off to Wraik Hill reserve and a quick walk around which  produced nothing, just a chaffinch and overflying gulls.......strange, why is it so many 'reserves' contain little yet other non reserves show plenty, its often the same at S.Swale LNR.  Anyway onto the Levels where I met Amy the RSPB warden and Nick for a brief chat on the roadside. Further on at the seafront I ticked of all the usual waders and a walk into the plots revealed two fieldfares, my first this winter plus a couple of black-billed blackbirds, a jay and a few reed buntings etc.. The list was up to 43 so far and moving up to the S.Swale LNR I found just one wheatear, a green sandpiper flying west over the back fields, stonechat, some skylarks, a merlin sat out in the stubble and a grey plover on the breakwater. Back at the car I checked the field opposite the Sportsman which contained 23 lapwings, curlews and starlings. Total 51 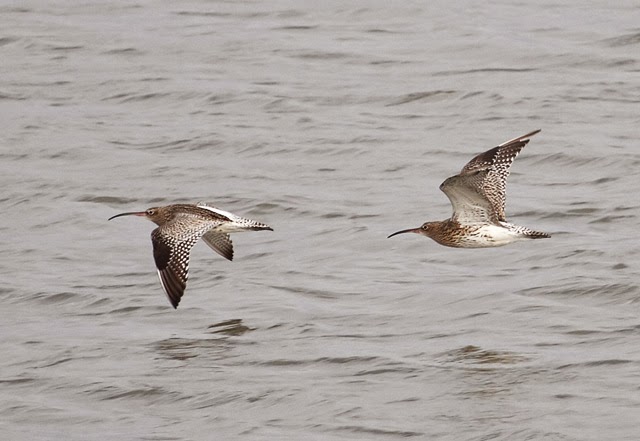 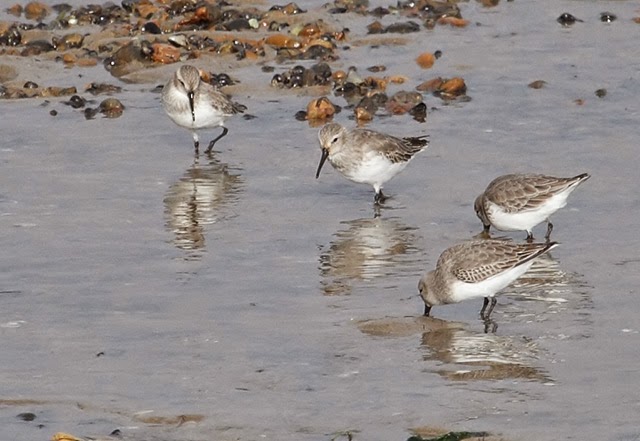 Curlew and Dunlin
Posted by Mike Gould at 07:27 1 comment:

Sunday 11th I had a short visit to Seasalter again seeing a merlin and c.600 golden plovers on the back stubble fields.

Tues, 14th. Another one hour visit to SS this time finding a snipe in a muddy part of the reedbed plus c.2500 brents, a big influx. Also 6 swallows, 2 wheatears ans a few stonechats.

Thurs 16th. A bit more time today so a visit to Wraik Hill which apart from a sparrowhawk didn't add much to the list, hoped for redwings but only 3 song thrushes etc.  A walk around the 'Alberta' field revealed 4 clouded yellows and a few stonechats plus the swan family complete with their seven cygnets.

Fri. 17th. Hoped initially for the Izzy shrike to be on view at Sandwich but not to be and lso dipped on the Dartford warbler.

Sat. 18th. A visit to Hampton revealed one purple sandpiper and the short visit to Reculver was a waste of time especially finding out that a SEO was seen back at SS coming in off the sea! 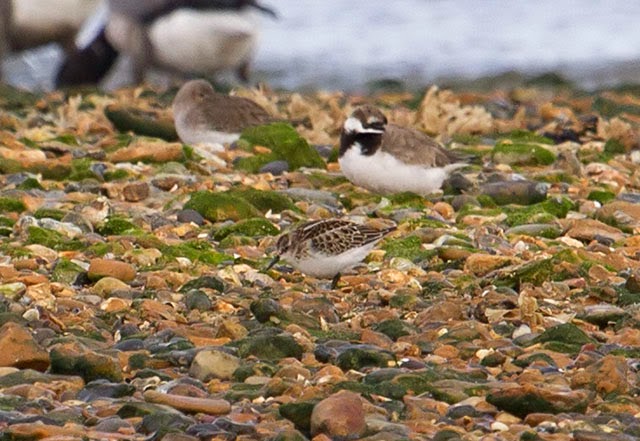 Little Stint
Posted by Mike Gould at 12:59 No comments:

What with the weather, the twins and a dose of man flu I've hardly been out the last week, so a good feeling this morning almost spoilt by the heavy rain which finally stopped at 10.30.  With the tide out I thought a walk along the wall at Seasalter could be interesting, especially to find if any wheatears were still present.  Not to be disappointed the usual two or three showed at the start of the seawall feeding on the flies just emerging plus some other scrumptious grubs on the grass path. Further on at the white post another two at least and in the reedbed five or six stonechats and a few reed buntings. It was good to see twenty or more skylarks in the back fields but linnets and mipits seemed thin on the ground as were goldfinches.  On the way back there were five wheatears at the start of the wall and I could see the others further back near the white post. 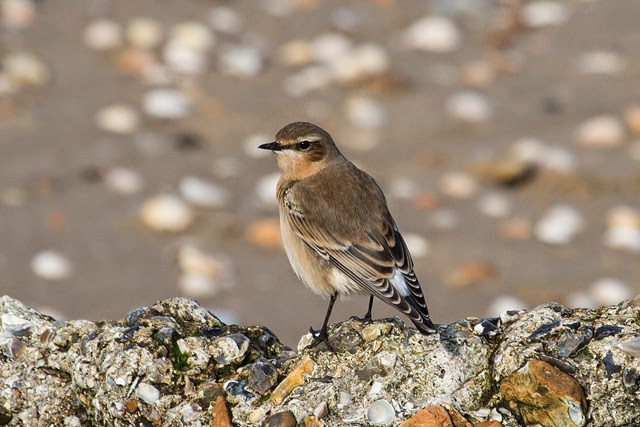 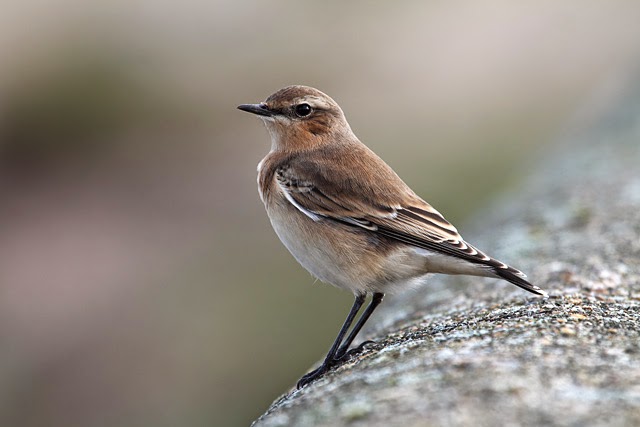 As the tide came in I could see the paddleship 'Waverley' coming out of Whitstable Harbour which deserved a couple of shots. 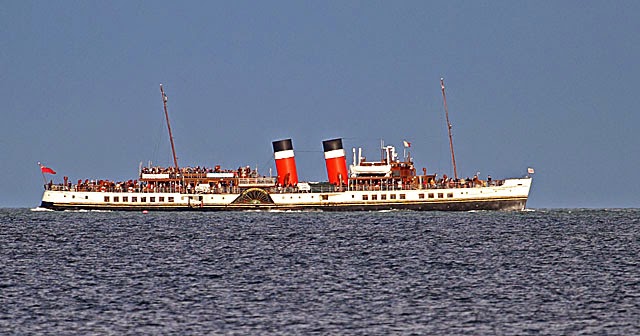 I returned late afternoon for a quick look along the beach etc., brents were coming close to beach, many of them juveniles so they must have a good breeding season. Many juveniles with the brent flock