Down on the beach at 7.30 hoping for some more tern activity but nothing. Met GB who was doing the same I think, he at least saw 7 greenshanks on the beach near the white post. We walked around the patch finding the usual whitethroats, goldfinches and stonechats plus two great spotted woodpeckers which was new for the month. Out on the mudflats, c.50 blackwits redshanks, 2 whimbrel, 15+ egrets but no big numbers of migrant waders.

A nice flat calm this morning, high tide at 10.45, no wind, what a difference the weather makes.  I counted 72 turnstones on the oyster dredger and 7 grebes on the sea but not much else to see with the tide in. Out on the fields it was nice to see a large flock of c.125 goldfinches again, a few years ago there were flock sizes of c.400 feeding on the thistles heads! Other birds included green wpker, reed bunting, whitethroat, 2 stonechats, 19 swallows 3 stock doves, 2 blackbirds and on the field opposite the Sportsman c.100 black-headed gulls with eight common gulls plus a count of 216 curlews which were all flushed by a marsh harrier.
PM.
I went over to Oare to see the white-rumped sandpiper, always miles away so just poor record shots. 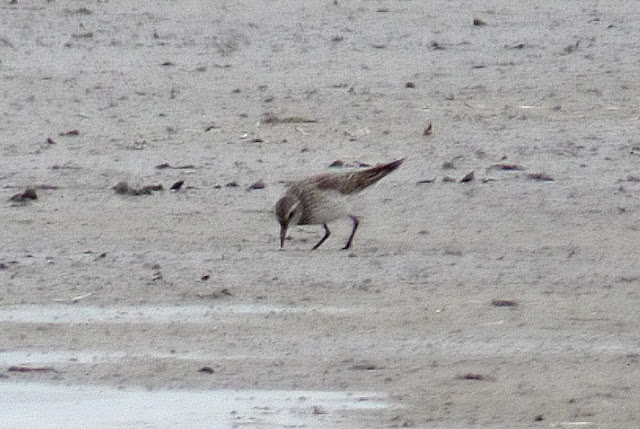 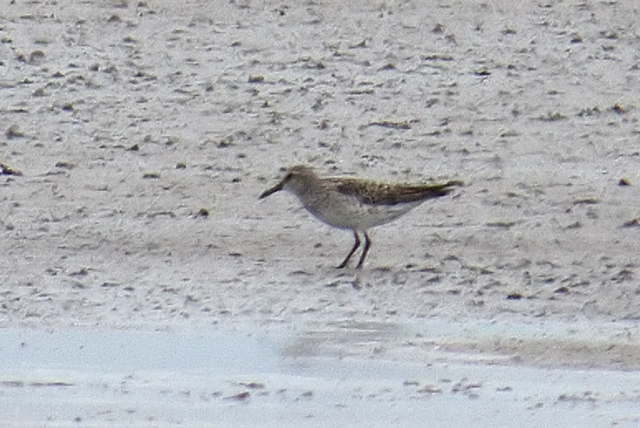 A strong easterly failed to produce much at Seasalter, just 5 gannets in the misty conditions.

A humid and dull start but very mild, 19 degs.. First stop was by the NRA outfall where there were 5 greenshanks on the mud, first I've seen for a few years on the mud, normally heard as flyovers. Moving up to the Sportsman accompanied by Ted Lee we saw a flock of c.100 linnets, 1 snipe and 1 yellow wagtail but no sign of wheatears or whinchat.  Returning eastwards the lone rook put in an appearance and a quick look over the sea I saw a fulmar  fairly close in heading west, I've not seen one for a couple years. Moving inland the large goldfinch flock was still evident plus several swallows, sand martins and at least 1 house martin tracking west, some very high. Ted saw a whinchat but I only got on it as it flew away and attempts to re-find it failed. However, scanning the willows revealed a willow warbler which was our 39th specie after which we retired for lunch!

I returned in the afternoon for an hour and found 4 stonechats, a sparrowhawk, pied wagtail and to my surprise a juvenile grey partridge jumped up beside me flying away into the long grass, a 'first' for the year.

A couple of days ago I picked up a copy of the new 'Kent Breeding Bird Atlas', I was surprise how well it was put together and presented, a most professional job, congratulations to all those involved. Well worth a purchase, 216 pages on quality paper, lots of photographs and text. 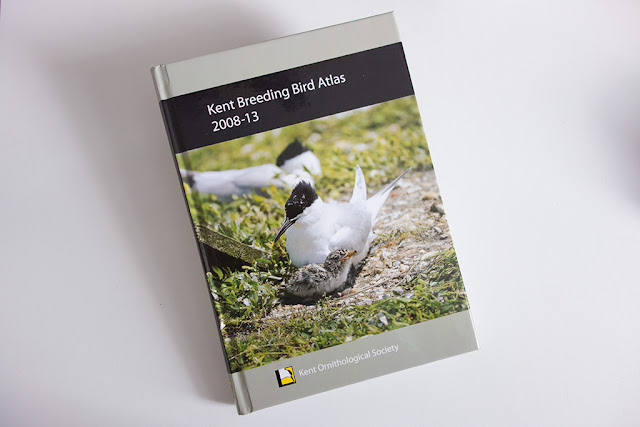 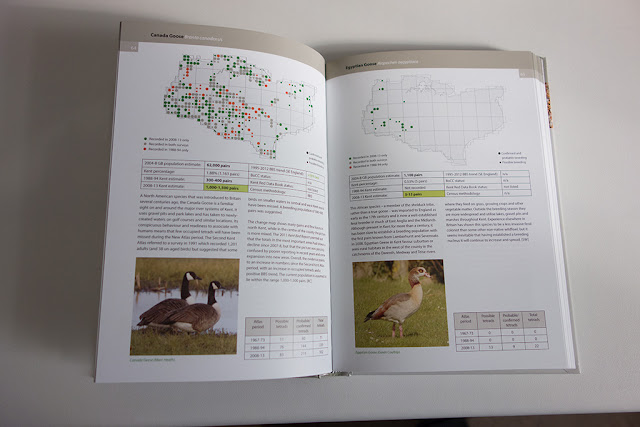 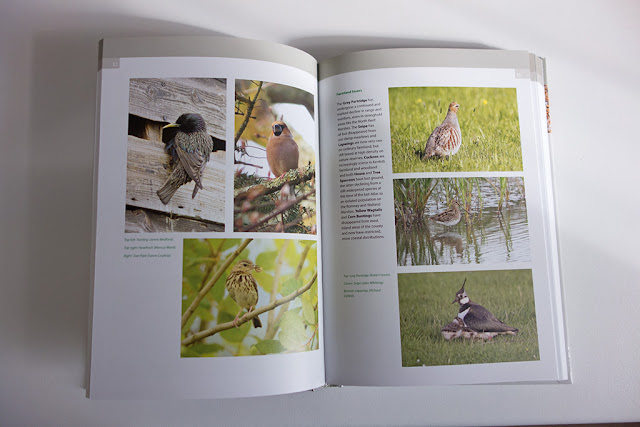 
First visit was to Stodmarsh and a rest in the Reedbed Hide after 11 hours with the kids yesterday, some of it at Wingham Wildlife Park (better than Howletts I thought).  It was quiet  just a heron and a few ducks although a hobby and a juvenile water rail perked things up a bit. I was lucky to see a kingfisher for a few seconds and got a few photos. However, the best came in the afternoon, at SS. I saw 8-10 black terns and 1 arctic tern on its own, followed by a flock of 14 whimbrel and 38 turnstones on the oyster dredger. 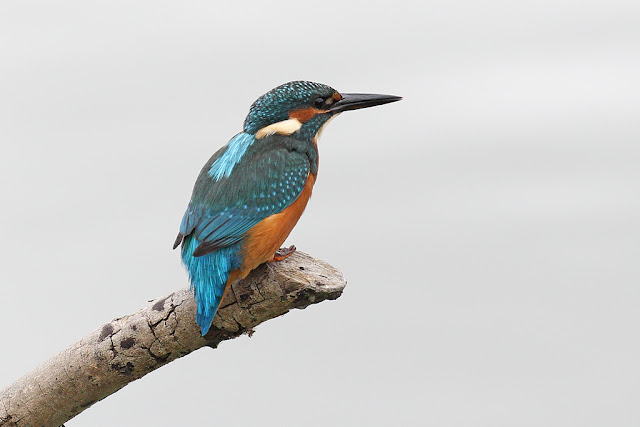 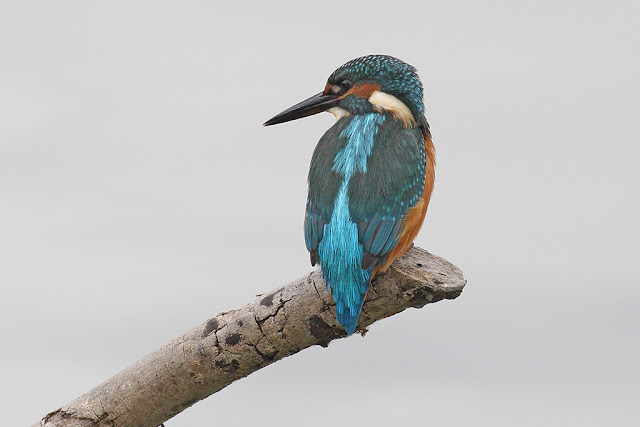 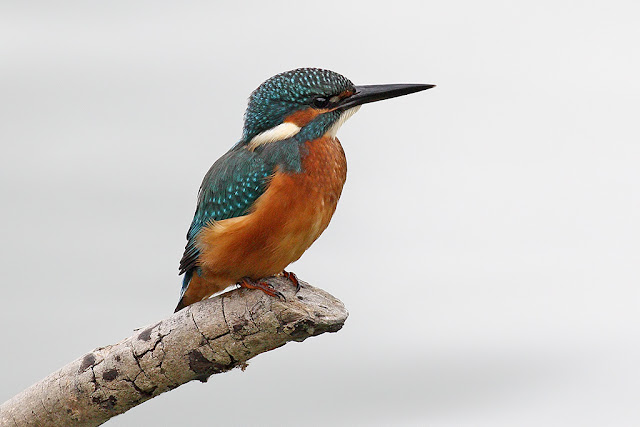 Then a call from Steve Ashton  alerted me to a big flock of little terns at Oare. I got there and counted 198 followed by another 21 flying in, the various birders there all agreeing 220 was a count most of them arrived at. A supporting cast consisted of 21 curlew sandpipers, 4 little stints and 2 wood sandpipers plus the mass of black-tailed godwits, redshank, dunlin, golden plover, lots of sand martins, avocets and ruff etc.. 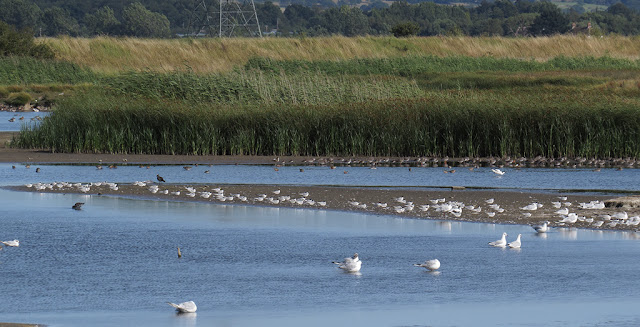 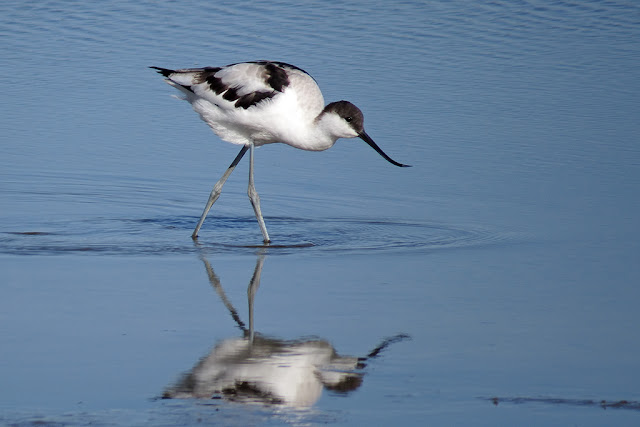 First Weekend of the Month


Back to birding and a race around the levels and seafront starting along Seasalter Lane with a hobby being the first bird of the day. Not a great deal out over the levels but in the roadside bushes a blackcap, greenfinch plus plenty of goldfinches and reed warblers.  Fly-overs were stock doves, green woodpecker and a couple of skylarks out in the fields, no harriers though. 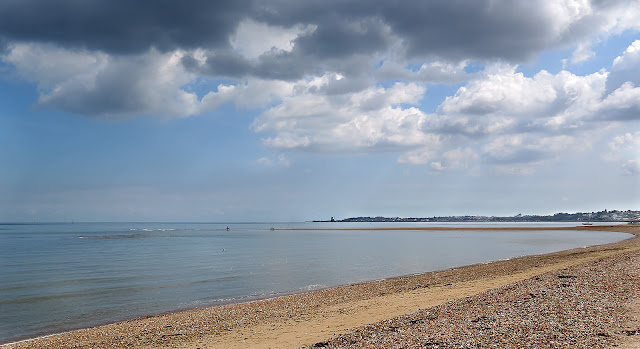 A view back to Whitstable, the beach has a new shingle 'Street', a good place to fish to not to roost!

Down to the seafront where the tide was coming in I counted 22 egrets, 16 common terns resting on various rocks, curlews, a few redshanks, 8 super looking grey plovers, 1 barwit plus c.150 blackwits, six gulls species were present including Med gull (opp the Sportsman). Inland, my first winter robin was tacking away, they come back to the garden early August as well. 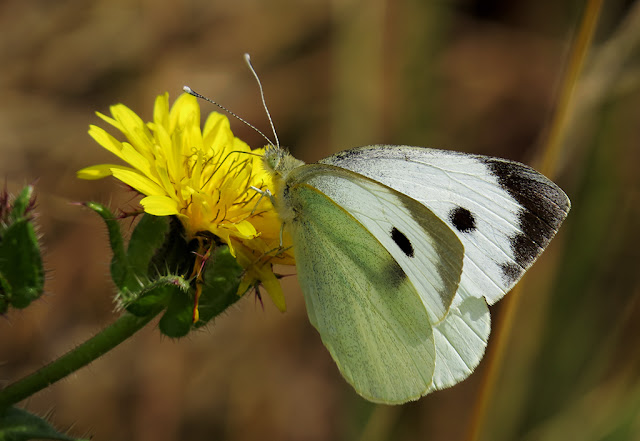 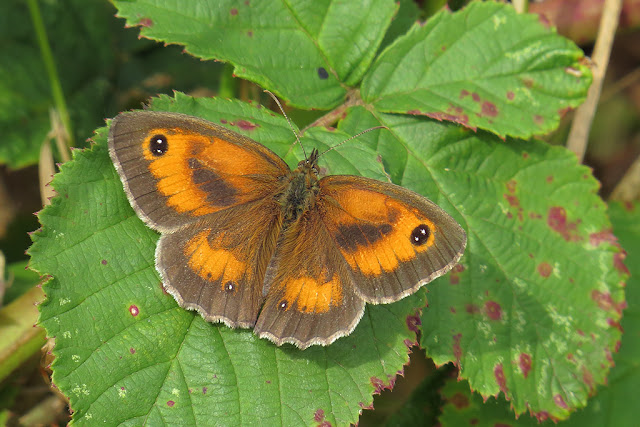 A walk around the plots was quiet, a few whitethroats but no stonechats, reed buntings or harriers but a brown hawker was good to see!  Plenty of gatekeepers, whites, skippers, 1 painted lady, 2 peacocks but no blues today! 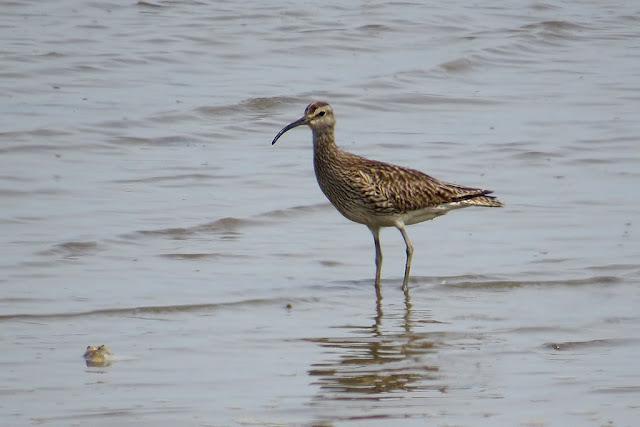 Back to the seafront, the tide was nearly up to the beach where I saw 2 Sandwich terns, several whimbrel singletons, 2 common sandpipers and 3 ringed plovers. Finally I returned to SS Lane only finding a buzzard plus later good numbers of swifts going west plus 2 sand martins.

A short visit to the plots trying to mop up a few I missed yesterday finding; 1 chaffinch, 2 wrens, dunnock, pheasant and 1 reed bunting (they seem to have all but gone) and still no stonechat.  I ventured up to the YC hoping to find a golden plover without success but perhaps better was a bright willow warbler in a bush next to the pond. Also the now lone rook put in an appearance next to the toilet block.  I had one of my biggest counts of 44 egrets strung out along the shore. 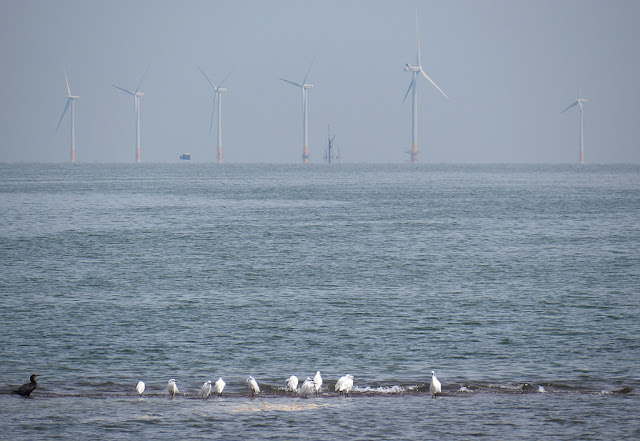 A count of 44 egrets today. One of the new big turbines in the distance plus the mast of a barge!

I left early and went up to Tankerton Slopes where there was a car show of 500 vehicles parked from Whit.Castle along to the other end of the slopes plus several groups playing all day. 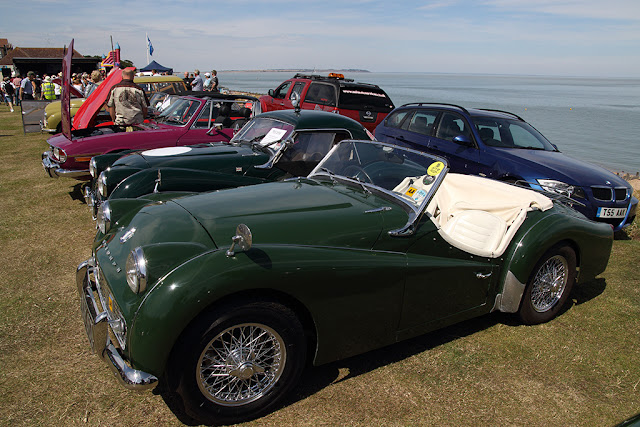 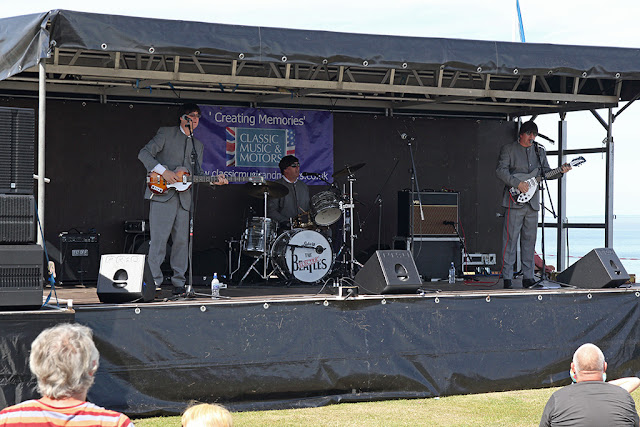 'The Electric Beatles', the lead singer had a voice just like John Lennon. I thought they were good!